A treadmill is a treadmill is a treadmill, right?  For the last 90 years or so, that seems to have been the case. Treadmills, other than the display screens attached to them, were largely distinguished from one another by the number of USB ports, magazine holders, water-bottle holders, and the like on their consoles rather than by the way they actually functioned under the hood. 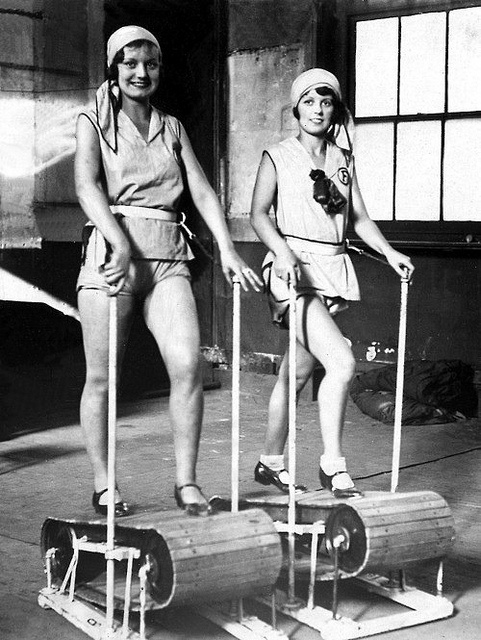 Take a look at this picture of a 1930s treadmill. Besides the absence of screens and the rather outdated attire, it looks like a state-of-the-art slat-belt treadmill that you would find today!

Not knowing exactly how a treadmill was put together and having zero experience in the physics of the device’s inner workings gave us the edge of ignorance and no preconceived notions of what a treadmill could become.

What if, instead of an endless moving belt taking you essentially nowhere, it was instead an interactive portal to everywhere? That was an idea worth considering and building a product around.

It was about two years ago that we took on the challenge of making a better treadmill.

I must have read dozens of articles over the past two years about how treadmills were generally boring. Their inability to change grades fast enough to simulate typically varying terrain was usually cited as both the cause of the boredom and the reason that treadmill workouts were limited in their effectiveness.  The lack of smooth, rapid grade variations, which limited runners to one incline for long periods, fatigues some muscles while underutilizing others, thereby reducing the efficiency and workout value for the user.

Tackling this design feature took us several iterations of the best way to rapidly incline and decline a plane while it carried a heavy load (a person). The method we chose—using a center pivot and lift chain—was elegant, energy-efficient, and most important, able to accommodate the proper mechanisms to allow a natural feeling of running up and down hills on a cushioned deck. Our proprietary suspension design allows the force of the foot landing on the deck to be absorbed with a “give” similar to that of a cinder track. The design eliminates the unwanted bounce and shudder common to other treadmills, and runners often remark on a feeling of comfort on the feet and body, even after runs as long as a half-marathon.

Whereas all other treadmills we’ve looked at lift the person with the deck, thus requiring the machinery to raise a 250-pound object more than a foot above the base level (and maybe hitting a low ceiling with the person’s head in the process!), we essentially tilt the deck under the person on a central fulcrum to create the inclines and declines. In a sense this is exactly what happens when you run outdoors: your ankle and body adjust to the slope of the terrain as your foot lands on it, while your head (and eyes) remain at the same height relative to the terrain. Using this concept, our treadmill can currently incline to a 38-degree grade and decline to 6 degrees—plenty of variation to accommodate trail runs, hikes, and challenging hill workouts.

The synchronization of the lift mechanism to the terrain is whisper-smooth, with near-instant reversals possible to simulate the bottoming-out in a valley or the cresting of a hill. We’ve even developed a running-on-the-Moon scene—a game-terrain that truly exploits the mechanism’s fluidity. While exhilarating in itself, it also provides runners with an exercise modality that tests coordination and balance as they run the rim of a crater or choose the best terrain to follow for an orienteering race. (I can’t wait to have Kilian Jornet try this treadmill one day!)

After we had solved the problem of tracking the terrain accurately and rapidly, we worked on an immersive visual environment for the user to run in, again to defy the bane of most treadmills: boredom.  We could keep a screen in a fixed position because the person was not being raised or lowered appreciably by height changes in the terrain, so we installed the largest available commercial viewing screen, with a 4k resolution and a 120-frames-per-second refresh rate. Placed at an optimal distance from the front of the treadmill, the screen effectively puts the user in the scene. This 3D-like environment is further enhanced in our Versafit booth, where black side panels reflect the scene’s lighting, thus creating a wider visual field. This immersiveness is far more practical than VR headsets, which have a reputation for making users uncomfortable to the point of nausea—and that doesn’t even factor in the sweat and fogging that occurs with headsets in a running situation. So in terms of creating a portal to an immersive world, aka the Metaverse—we’ll check that box: ✓

The next feature we tackled was an intuitive and unconstrained way to run on the treadmill. Our solution was to use a vision-based control system, now patented, that focused on the user’s gestures and could interpret commands such as “speed up,” “slow down,” “stop,” and even “turn left” and “turn right” in the scene. With a game-like environment to run in, we didn’t have to restrict users to fixed paths, as other treadmills do, and in this process, the concept of a free-run mode was born. Freed of preconceived paths, users were able to navigate and explore the terrain; each scene presents innumerable ways to run—and even to interact with other users and with objects in the environment. The control system can sense when you’re jumping over a hurdle, and when you’re pushing, pulling, or even punching an object.  Thus it immerses you, game-like, in the environment.

Now that we had created a high-performing treadmill, we wanted to be sure that it could be used comfortably and safely in what definitely would be some unique situations. Full-length handrails let users stabilize and orient themselves on the treadmill deck, but they can also be used for interactions and exercise modes such as jumping, pushing, and pulling. These rails are sleek enough to drop out of view, allowing a user to feel freed and immersed in the surroundings, but they are very strong and are there when you need them, extending to the very end of the deck where you might find yourself on a steep hike.

Other safety features on our treadmill include a vision-based emergency stop that shuts the machine off when the deck is empty for more than a few seconds; a corded emergency stop for when a user falls too far behind the deck; and gesture-based stopping whenever the control screen is touched.

All of these actions, whether increasing or decreasing speed, turning, or stopping, can be safely performed without taking your eyes off the screen or hunting for switches, knobs, or buttons. The only thing it currently lacks is a mind-meld to intuit your thoughts, à la Star Trek—but we’re working on that too!

We have implemented the XPRience treadmill in a booth dubbed the Versafit Pod, which creates a unique running space. With a Covid-mindful filtered air supply and exhaust, it offers an opportunity for a personalized immersive setting and a departure from the shoulder-to-shoulder cacophony of traditional gym treadmill setups. (Exploring a sunset walk on a beach or running beneath a star-filled sky on the Moon just took on new romantic possibilities.) With available networking between the scenes in different pods, you can still have the social interactions of your choice with other users.

“So,” I’ve been asked, “what inspired all these changes to the humble treadmill?” Frankly, it was my love of trail running, combined with having a great team of engineers and being unconstrained by legacy thinking. Understanding the relevant technology and having the ability to integrate somewhat disparate systems allowed our robotics engineers, mechanical engineers, and game developers to move the needle along as far as they have.

To bring out a commercially viable product required some IP protection, and with the granting of multiple U.S. patents, we hope to stake out a corner of the very crowded fitness-equipment market. Roam149 is where we intend to prove the efficacy of all these innovations in ways that are meaningful for our users.

We’ve just begun our quest to enable the immense opportunities of integrating fitness, training, race preparation, gaming, and education that this portal can open. We are currently working on a wheelchair-accessible mount to the treadmill so that another group of athletes can enjoy the benefits of the device.

In my next blog, I’ll share some of the amazing things that humans do better on the move, and how a treadmill can help unlock unsuspected aspects of human potential in subtle ways. Until then!

Sid Raman, P.E., LEED AP, CBCP is an entrepreneur and engineer with experience in structural, geotechnical, mechanical and energy engineering. Latest interests include automation and construction related robotics. Founder, and inventor of Roam149.